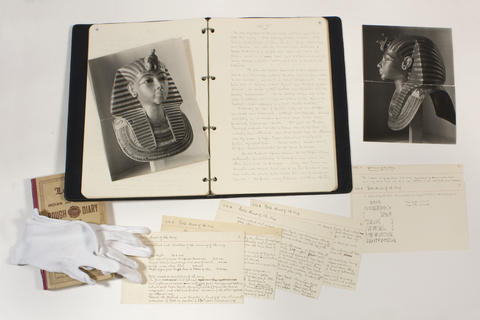 British archaeologist and photographer. Born, Stamford 1879. Died, Asyut 1940. Began his photographic career in Florence with the art historian R. Cust. He was then engaged as a excavator at Thebes by Theodore Davis between 1910-14. Then from 1914 onwards he worked for the rest of his career as a photographer for the Metropolitan Museum of Art, New York. His task was to record many of the royal and private tombs at Thebes. Between 1922 and 1933 he was lent by the Metropolitan Museum to Lord Carnarvon and Howard Carter to make a photographic record during the excavation of the tomb of Tutankhamun.

British chemist. Born, Chorlton-upon-Medlock 1867. Died, Luxor 1945. Educated, School of Mines, London, and the Royal College of Science. Worked for the British Government as an assistant chemist, until ill health prompted a move to Egypt. There he was engaged as an assistant chemist to the Government Salt Department, 1898. He initially managed the Survey Department and Assay Office laboratories, he was then appointed Chemist for the Antiquities Service, 1923-32. Honorary Consulting Chemist, 1932-45. He was able to put his expertise in cleaning, consolidating, and conserving antiquities to good use when he was lent by the Antiquities Service to H. Carter during the excavation of the tomb of Tutankhamun. He also worked at Tanis with P. M. Montet. Published many books about his work in this field.

British Egyptologist. Born, Eltham 1879. Died, Oxford 1963. Educated at Charterhouse, then studied Classics, Hebrew and Arabic at The Queen's College, Oxford. Worked with A. Erman on the preparation of material for the Wörterbuch der ägyptischen Sprache and was sub-editor 1906-8. Laycock Studentship, Worcester College, Oxford, 1906-12. Edited many Egyptological publications including the Journal of Egyptian Archaeology. Published extensively in the field of Egyptology. Honorary Secretary of the Egypt Exploration Society, 1917-20, Vice President and then President, 1959-63. Many distinctions during his career. Specialized in hieratic texts on papyri and ostraca. Published the 1st edition of Egyptian Grammar in 1927, which is still one of the essential learning aids for Middle Egyptian. Member of the Tutankhamun excavation team, for which he recorded all the inscriptions from the tomb.

Percy Edward Newberry M.A. O.B.E. was born on 23 April 1869 and died at his home in Godalming, England on 7 August 1949. He was educated at King’s College School and King’s College, London and later mentored in the field of Egyptology by Reginald Stuart Poole of the British Museum and Francis Llewellyn Griffith. Newberry began his career at the Egypt Exploration Fund and from 1890 to 1894 headed an expedition to investigate the tombs of Middle Kingdom nomarchs at Beni Hasan and El Bersha. In 1893-4 he published a two-volume monograph Beni Hasan which remains a definitive account of the tombs there. Newberry then operated as a freelance excavator from 1895-1901, undertaking a survey of the Necropolis at Thebes. In 1902 Newberry worked on the <i>Catalogue Général</i> of Egyptian Antiquities at the Cairo Museum.

In 1906 Newberry was appointed Brunner Professor of Egyptology at the University of Liverpool, a position he held until 1919. In 1919 Newberry was appointed O.B.E. In 1923 he served as President of the Anthropological Section of the British Association and from 1926-1927 was Vice-President of the Royal Anthropological Institute. In 1929 Newberry accepted the chair of Ancient Egyptian History and Archaeology at the University of Egypt, Cairo, a post he held until 1933.

Newberry published extensively on the field of Egyptology (see Magee, Diana, 'The Egyptological Bibliography of Percy Edward Newberry (1869-1949), in <i>The Journal of Egyptian Archaeology</i>, Volume 76, 1990) as well as Botany. Notable publications include several volumes in the series of the Archaeological Survey of Egypt, two volumes in the <i>Catalogue Général</i> of the Cairo Museum and <i>Scarabs</i> (1906).

On 12 February 1907 Newberry married Essie Winifred Johnston (1878-1953). There were no children of the marriage. Although largely undocumented, Newberry was previously married from 1894 to Helena Aders who he divorced in 1904.

Carter bequeathed his excavation records to his niece Miss Phyllis Walker in 1939. For other material included within this group, see the catalogue.

Miss Walker donated Carter's excavation records (and Carter MSS) in several groups in 1945, 1946, 1959, and 1972. Other material was acquired at various times, see the catalogue.

Mostly kept as received and arranged in four groups.

Property of the Griffith Institute. No restrictions apart from certain categories listed in the catalogue.

Copyright Griffith Institute, Oxford, except for those items marked otherwise in the catalogue.

These are the original excavation records. For other and secondary material included here, see the catalogue.

Refer to the catalogue. Digitised copies of almost all Carter's Tutankhamun excavation records exist in the Griffith Institute.