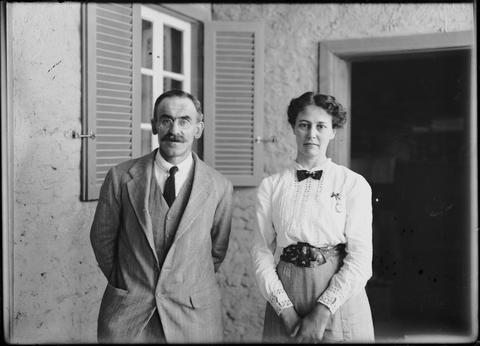 British Egyptologist; he was born Broughton, Lancashire 14 Sept. 1865, son of Revd James Dickerson Davies and Emma Mary de Garis; he entered Glasgow University, 1884, with a scholarship from Dr. Williams' Library, London; MA, 1889; BD, 1891; later postgraduate at Marburg Univ.; Hon. member of German Arch. Inst., 1928; Hon. MA, Oxon; he was Congregational Minister at Ashton-under-Lyne where he became acquainted with Miss Kate Bradbury (afterwards Mrs. F. Ll. Griffith) who interested him in Egyptology, which he began to study; he next went to Australia as a Unitarian Minister in Melbourne until 1898, when he joined Petrie at Dendera; during the following years he copied an enormous number of tombs for the Arch. Survey of the EEF: Sheikh Said, 1901, Der el-Gebrawi, 1902, and Amarna, 1903-8; these, together with five more tombs at Thebes were published in 10 vols. of the Arch. Survey memoirs, both text and plates being executed by Davies; the merit of this work was recognized by the award of the Leibniz medal of the Prussian Acad.; he also accompanied Breasted in his expedition to Nubia, and assisted Reisner at the pyramids; he married in 1907, Miss A. M. Cummings, herself an accomplished artist and a trained copyist; he then settled at Thebes and worked for many seasons copying tombs for the MMA, which were published in a series of sumptuous volumes; in addition to these larger works he made many contributions to JEA and other journals. He also published, The Mastaba of Ptahhetep and Akhethetep at Saqqarah, 2 vols. 1900-1; The Rock Tombs of Sheikh Said, 1901; The Rock Tombs of Deir el Gebrawi, 2 vols. 1902; The Rock Tombs of El Amarna, 6 vols. 1903-8; The Temple of Hibis in El Khargeh Oasis, pt. 3, ed. Ludlow Bull and Lindsley F. Hall, 1953; A Corpus of Inscribed Egyptian Funerary Cones, ed. M. F. Laming Macadam, pt. I, 1957. He died at The Copse, Hinksey Hill, Berkshire, 5 Nov. 1941.

British artist and copyist; born Salonika, 6 Jan. 1881, daughter of Cecil J. Cummings and Sarah Tannoch; she was trained at the Slade School of Art and the Royal College of Art under Walter Crane; her interest in Egypt was aroused when she visited Alexandria in 1906, and she married Norman de G. Davies the following year, with whom she was to record a great many Theban tombs; an excellent artist she went to great pains to reproduce colours as exactly as possible, and achieved remarkable results in the days before colour photography; she used egg tempera when making copies of scenes instead of merely water colours; in all she worked at Thebes for over thirty years, 1908-39; three of the five vols. of The Theban Tombs Series were entirely her work, the others had drawings by her husband as well, while Gardiner edited the series; Nina Davies also copied at Amarna, 1925-6, and at Beni Hasan, 1931-2; in 1923 Gardiner exhibited a collection of her copies at the Victoria and Albert Museum, and this was followed by the publication of two folio vols. of Ancient Egyptian Paintings, 1936; in 1954 a miniature Penguin edition of some of these was illustrated with small reproductions and had a text by the artist; in 1958 she published a series of paintings from originals in the British Museum and the Bankes Collection; she, with her husband, also helped Gardiner in selecting and making drawings of good representative hieroglyphs of the XVIIIth Dynasty to use in his hieroglyphic fount, and published Picture Writing in Ancient Egypt, 1958; she contributed a number of articles to the JEA and left two of her copies to the Egyptian Department of the British Museum and other copies together with a shabti figure to the Ashmolean Museum; her Egyptological books were bequeathed to the Griffith Institute and to the Pitt-Rivers Museum, Oxford; she died in Hinksey Hill, Berkshire, 21 April 1965.