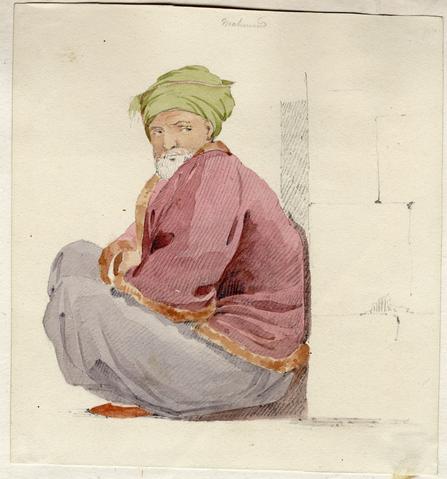 British architect. Born, Westminster 1795. Died, Clapham 1860. In a distinguished career he was most famous for designing the Houses of Parliament. Somers Clarke was numbered amongst his pupils. Met Mr D. Baillie when visiting Greece and Turkey in 1817, and was invited to accompany him on a tour of Egypt and Palestine, and thus became the first English architect to record monuments in Egypt. They followed the Nile up beyond Philae; Barry left graffiti on many monuments during his time there.

The small album was in the possession of his grandson C. A. R. Barry in 1937, which was then passed on to P. E. Newberry. The large album was acquired from Myers Co. Ltd. by the Griffith Institute in 1950.

The small album was among the Newberry MSS which were presented by Mrs Newberry via the British Museum in 1954.
The large album was acquired from Myers Co. Ltd. by the Griffith Institute in 1950.

Handwritten catalogue for the smaller album made by Dr Moss (notebook A.21.68-72).