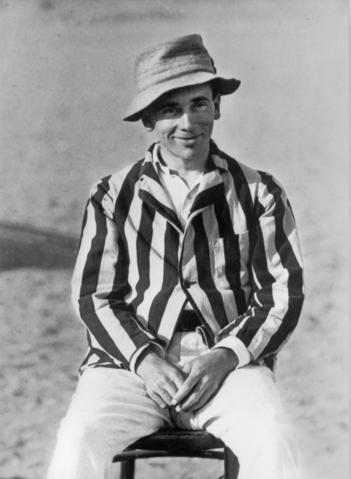 British Egyptologist and archaeologist. Born, Liverpool 1882. Died, Oxford 1934. Studied Mathematics and Classics at Queen's College, Oxford. Jodrell Scholar. Craven Fellow, 1906, which enabled him to study archaeology in Rome. Pelham Student, British School in Rome, 1909. Entered Egyptology and excavated with P. E. Newberry at Abydos, and then in the Delta in 1909. Continued working at Abydos, 1909-13, at first with E. Naville, and eventually on his own. Studied Egyptian with Sir A. Gardiner and taught himself Coptic and Demotic. Lecturer in Egyptology, University of Manchester, 1913-28. Director of the Egypt Exploration Society's Excavations. Laycock Student in Egyptology, Oxford, 1923. Brunner Professor of Egyptology, Liverpool University, 1920-33. Reader and Professor designate in Egyptology, Oxford, 1933-4, but died before the appointment was confirmed. Fellow, Queen's College, Oxford, 1933. Specialised in the study and translation of papyri, especially those concerned with mathematics and Ramesside tomb robberies at Thebes. Edited the Liverpool Annals of Art and Archaeology, 1921 onwards, and the Journal of Egyptian Archaeology, from 1923. Published extensively in these publications as well as many others.

The slip index drawers and notebooks were presumably passed to Sir Alan Gardiner after Peet's death.

Slip index drawers and notebooks formed part of the bequest of Sir Alan Gardiner. Small watercolour donated by Mrs Clare Newton (Peet's great-niece) on 28/06/2014. Group of family papers and ephemera donated by Mrs Catherine Barnes (Peet's great-granddaughter) on 29/10/2014. Some additional correspondence donated by The Queen's College, University of Oxford (the Peet Library) on 03/06/2019.