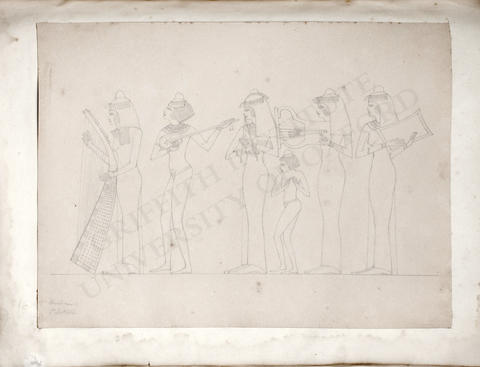 Five female musicians playing the harp, lute, double-pipe, lyre and tambourine, accompanied by a small female dancer, from a scene in the tomb of Amenhotep-si-se (TT 75), temp. Thutmosis IV, at Sheikh Abd el-Qurna in Thebes:
-pencil drawing
-mounted
-35 x 24.9 cm
-[on recto of drawing] 'Tomb near 17. / 1st Sept 1843.' (pencil note)
-[on mount] '12' (pencil note)
-[on verso of drawing] 'Female Minstrels. / Tomb to which there is a forced passage from / No 17. / 1st Sept / 2nd Sept / } / 1843. / With exception of the first face on the left, all the others have been / carefully injured. I have restored these. The date of the tomb / I do not know, but it is probably about Amenophth 3rd. The / paintings are very badly done, and the tomb is unfinished. / The colours however are very fresh. There is in this as in other / tombs different colours for the females. The harper is yellow, / but the next woman is rather copper coloured, so is the / little girl, and the lute player. Were they women from the / Upper country, brought expressly for their national instru / ments? The girdle was not confined to the Upper country / women. Sotennofrä wears it.' (pencil note)