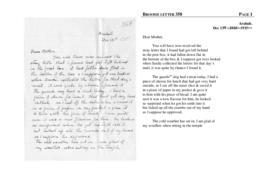 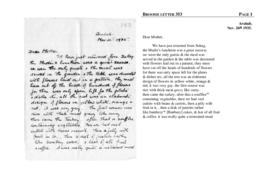 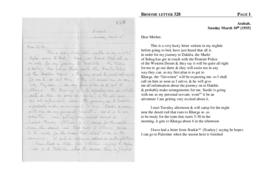 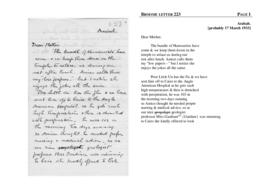 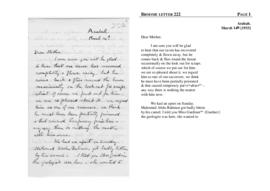 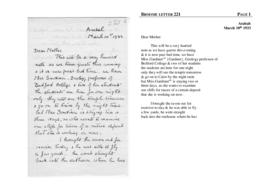 List and copies of graffiti from Thebes, mainly from Valley of the Kings

29 handwritten pages with notes in Egyptian hieratic and English.
List and copies of graffiti predominantly from the Valley of the Kings, some with concordances to earlier lists of graffiti recorded by W. Spiegelberg and H. Carter.

Maps with locations of graffiti at West Thebes

Plan of Temple (probably Abahuda) with mapped locations of graffiti

1 page, handwritten on both sides:
-Brief notes on Spiegelberg graffiti 64 and 774
-Hieroglyphic transcriptions and doodles

1 tracing, with handwritten annotation, of a demotic graffito from the Inner Hall (South wall, left side), in the Temple of Sethos I at Redisseya. See TopBib vii.324 (22).

Graffito, Temple of Seti I, Redisseya

Tracing of a hieratic graffito from the façade (left side, 2nd, 3rd and 4th courses) of the Temple of Seti I at Redisseya. See TopBib vii.321(2).

Graffiti transcriptions, not identified, perhaps from tombs at Thebes

1 handwritten hieroglyphic transcription of line 4 of graffito 1944, and the complete graffito 1946.

Professional and personal correspondence, the majority of letters date between 1946-1970 and are addressed to J. Černý in London, Oxford, Prague and other European, American and Egyptian addresses and locations. The letters contain Egyptological information regarding text readings, translations, exchange of information on objects in museums or in situ, sites and texts.

Graffito from the tomb of Ptahshepses at Abusir

1 photograph, positive print, annotated on the back.
Photograph of a hieratic graffito of year 50 (probably of Ramesses II) of the scribe Ptahemwia and father Yupa, concerning their visit to Pyramid of Sahure and paying homage to the goddess Sekhmet. Graffito from room II (Second Portico) in the mastaba-tomb of Ptahshepses, Middle of Dyn. V, at Abusir. See TopBib iii2.342(8) and (9).

1 inked tracing, 7 lines of a hieratic graffito from KV 9, tomb of Ramesses VI, Thebes, visited by scribes in year 9 of Ramesses IX. Scribe Amenhotep and his entourage, visiting the tomb (see TopBib i2.517).
Reference to a previous record made by Champollion, J. F., Notices descriptives ii (1889), 635 (OEB 136960).

1 inked tracing of 3 lines of a hieratic graffito, from the house of Amennakht (C.IV), Dyn. XX, at Deir el-Medina (see TopBib i2.702).
Tracing made by Michel Malinine.

38 groups of records and notes on graffiti, including tracings, transcriptions and maps.
Notes and indexes mainly for Theban graffiti and the Nubian graffiti.
A set of proofs for a part of Graffiti de la montagne thébaine.
The Theban material largely covers work on the Theban mountain in the 1960s and includes preparation of graffiti lists for publication.
There are also some graffiti Černý consulted for A. J. Arkell in the late 1940s/early 1950s.

First two pages of an article on the Nile.

Rough draft and notes used in preparation of article.

Draft of an article and material used for its preparation. Includes letters from G. Posener, I. E. S. Edwards and G. R. Driver.
For inclusion in Hebrew Biblical Encyclopedia [not published?].