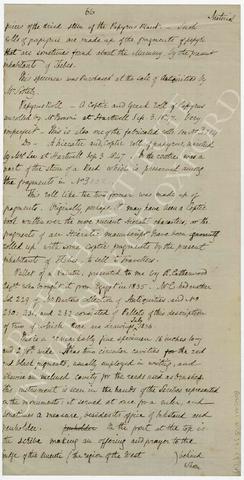 Page of handwritten catalogue of Egyptian antiquities:
-ink text on paper
-loose
-16.0 x 31.6 cm
-[on verso] '66' (ink note)
-[on verso] 'Material' (ink note)
-[on verso] 'pieces of the dried stem of the Payprus Plant. - Such rolls of papyrus are made up of the fragments of papyri that are sometimes found about the mummy by the present inhabitants of Thebes. / This specimen was purchased at the sale of antiquities by Mr Sotheby. / Papyrus Roll - A Coptic and Greek roll of Papyrus unrolled by Mr Bonomi at Hartwell Sep. 3. 1847. Very imperfect - This is also one of the fabricated rolls. See No 3114 / Do - A hieratic and Coptic roll of papyrus, unrolled by Mrs Lee at Hartwell Sep 3. 1847. In the centre was a part of the stem of a reed which is preserved among the fragments in No 3102. / This roll like the two former was made up of fragments. Originally, perhaps, it may have been a Coptic book written over the more ancient Hieratic characters; or the fragments of all Hieratic manuscript have been ignorantly rolled up with some Coptic fragments by the present inhabitants of Thebes, to sell to travellers. / Pallet of a Painter, presented to me by R. Catherwood Esqre who brought it from Egypt in 1835. Mr C. had another Lot 229 of Mr Bartons collection of antiquities; and No 230; 231; and 232 consisted of Pallets of this description of two of which there are drawings July 1836. / This is a remarkably fine specimen 16 inches long and 2./8th wide. It has two circular cavities for the red and black pgiments, usually employed in writing, and likewise an inclined cavity for the reeds used as brushes. This instrument is seen in the hands of the scribes represented on the monuments: it served at once for a ruler, and sometimes a measure, besides its office of inkstand and penholder. On the front at the top is the scribe making an offering and prayer to the judge of the Amenti (the region of the West) behind whom' (ink note; with '3114' and '3102' in pencil).