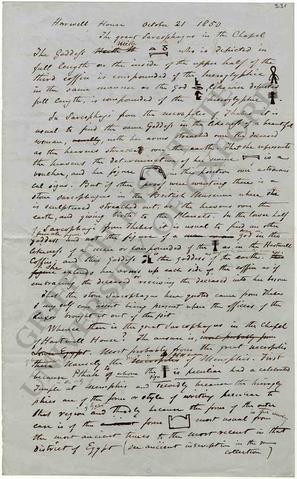 Notes on the wooden sarcophagus and two coffins of Ir, Dyn. XXVI, from Thebes, formerly in H. Salt, J. Lee and Lord Amherst collections and at Sotheby's in 1921, current location not known (TopBib i2.835):

In Sarcophagi from the necropolis of Thebes it is
usual to find the same Goddess in the likeness of a beautiful
woman, , with her arms streached over the deceased
as the heavens streache over the earth. That she represents
the heavens the determinative of her name [N1] is a
voucher, and her figure [C199] in this position over astronomi
cal signs. But if other proof were wanting there is a
stone sarcophagus in the British Museum where she
is sculptured streached out, as the heavens over the
earth, and giving birth to the Planets. In the lower half
of Sarcophagi from Thebes it is usual to find an other
Goddess female figure and not the figure of a man or god in the
likeness of a man or compounded of the [R11] as in the Hartwell
Coffin; and this goddess [X1\:H8-Q1] is the goddess of the earth. as might be naturally suppose(?) She extends her arms up each side of the coffin as if
embracing the deceased or receiving the deceased into her bosom

Whence then is the great Sarcophagus in the Chapel
of Hartwell house? The answer is, . Most probably from the great necropolis
of Lower Egypt there namely the desert of Sakkara of Memphis. First
because Pthah to whom(underlined) the sign R11 is peculiar(underlined) had a celebrated
Temple at in the city of Memphis and secondly because the hierogly
phics are of the form or style of writing peculiar to
this region of Egypt and thirdly because the form of the outer
case is of the form [Q6] most usual from in this nearby(?)
the most ancient times to the most recent in that
district of Egypt (See ancient inscription in the same
collection)'