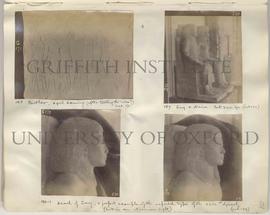 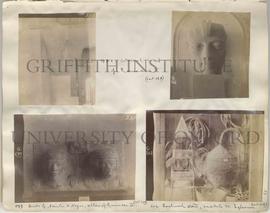 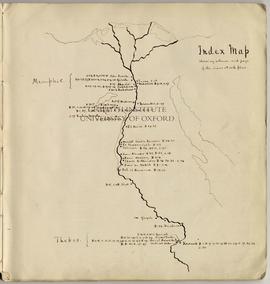 Map titled: 'Index Map shewing volume and page of the views at each place.'. 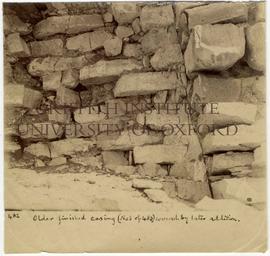 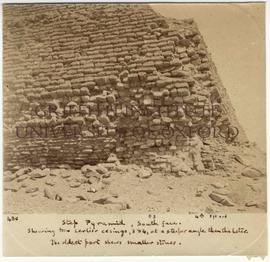 There are also two arrows numbered 3 and 4 and a '5 ft rod' labelled. 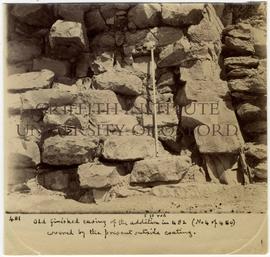 Saqqara (Saqqâra). Step Pyramid of Neterikhet (Djoser).
Caption reads:
'Old finished casing of the addition in 482 (No 4 of 480)
covered by the present outside coating.' 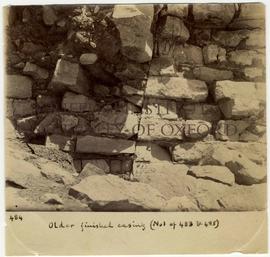 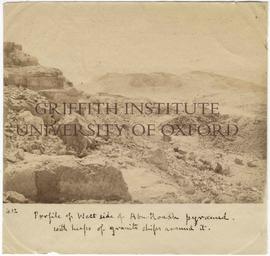 [412] Profile of West side of Abu Roash pyramid.

Abu Rawash (Abû Rawâsh). Pyramid of Radjedef (Razedef).
Caption reads:
'Profile of West side of Abu Roash pyramid.
with heaps of granite chips around it.' 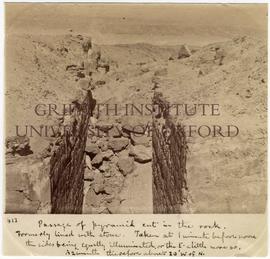 Abu Rawash (Abû Rawâsh). Pyramid of Radjedef (Razedef). Interior.
Caption reads:
'Passage of pyramid cut in the rock.
Formerly lined with stone. Taken at 1 minute before noon
the sides being equally illuminated, or the E. a little more so.
Azimuth therefore about 20'W of N.' 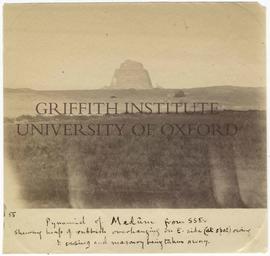 Meidum (Maidum). Pyramid of Sneferu (Snefru; Snofru).
Caption reads:
'Pyramid of Medûm from S.S.E.
Shewing heap of rubbish overhanging on E. side (at spot) owing
to casing and masonry being taken away.'

Meidum (Maidum). Pyramid of Sneferu (Snefru; Snofru).
Caption reads:
'Pyramid of Medum from S.S.W.
Shewing remains of finished casings outside the present pyramid
(at the spots) in rubbish heap: and the rough bands of stone on the
pyramid. Where the steps joined the remaining masonry.' 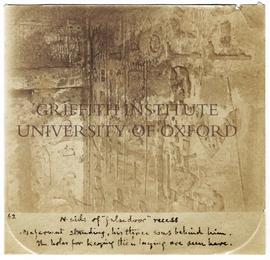 Meidum (Maidum). Tomb of Nefermaat (Nefermaet). Hall.
Caption reads:
'N. side of "false door" recess.
Nefermat standing, his three sons behind him.
The holes for keying the inlaying are seen here.' 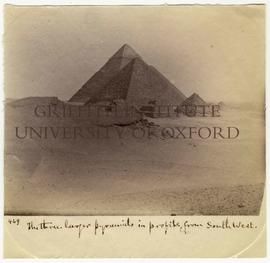 [449] The three larger pyramids in profile, from South West.

The 'Second Pyramid' is also labelled. 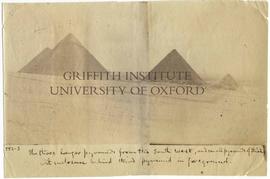 [552-3] The three larger pyramids from the South West

Giza (Gîza). Pyramid Field. View of pyramids.
Caption reads:
'The three larger pyramids from the South West, and small pyramids of third.
with enclosure behind third pyramid in foreground.' 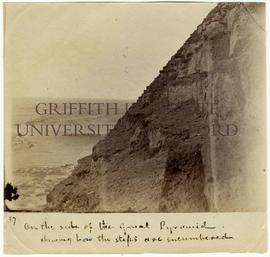 Giza (Gîza). Pyramid of Khufu (Cheops).
Caption reads:
'On the side of the Great Pyramid.
shewing how the steps are encumbered' 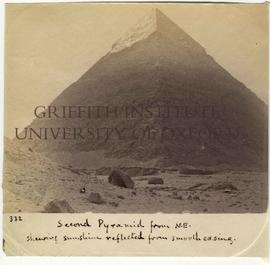 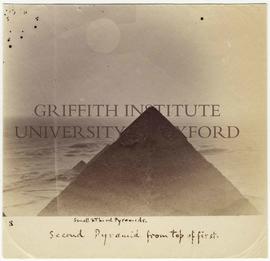 [8] Second Pyramid from top of first. 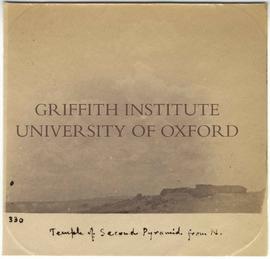 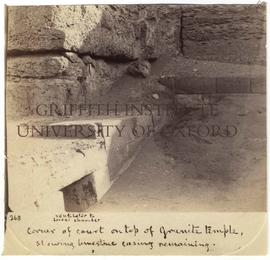 [368] Corner of court on top of Granite temple 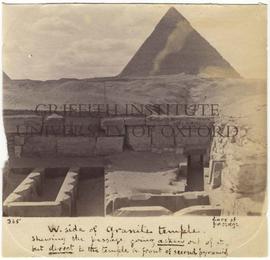 Giza (Gîza). Pyramid Complex of Khafra (Khafre; Khephren). Valley Temple and Pyramid.
Caption reads:
'W. side of Granite temple.
Shewing the passage going askew out of it,
but direct to the temple in front of second pyramid'

Also label for 'door of passage'.

Giza (Gîza). Pyramid Complex of Khafra (Khafre; Khephren). Valley Temple.
Notes opposite photographs on page 19 which read:
'The Granite Temple stands on the plain at the foot of the pyramid hill of gizeh; and was about 40 or 50 feet high, when unencumbered originally. It had probably two entrances, one at the N.E., and one at the S.E. corner; and from the N. end of the W. side a causeway led askew out of the temple, directly (No 365) up to the door of the temple on the E. side of the Second pyramid, which is exactly similar to it in the character of the building. This granite temple consisted of a great hall of granite with colonades (No 376) about 22 1/2 feet high; and on the roof an open court of limestone, now stripped of its casing all but one corner (No 368). The great hall is T shaped, 77 feet long & 86 feet across. The lesser hall is 60 feet long and 12 1/2 ft wide. The court on the top is 103 feet by 86 feet.
The fact of a skew passage being part of such a regular and well-oriented building, shews a strong necessity for it; and therefore that the place to which it led must have been built before this temple; which must then be after, or in the end of the reign of Chefren of the fourth dynasty. The great statue of Chefren in the Bulak Museum was found, with smaller statues, in a well in the lesser hall; the cynocephalus ape now lying there is probably the oldest idol known.
Thought the Sphinx is placed near this temple it has no known connection with it.

In the bottom right hand corner of the page there is also the note: 'See over for plan.'. 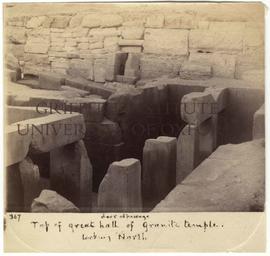 Giza (Gîza). Pyramid of Menkaure (Menkaura; Mykerinos).
Caption reads:
'Granite casing of third pyramid.
Shewing that the casing was left in the rough on the
outside, with lugs for lifting the blocks; and that it
was only finished just by the doorway.'

Also label for 'door behind heap'.