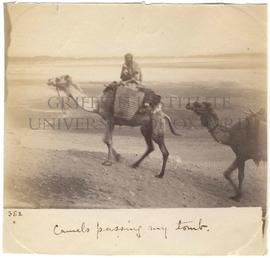 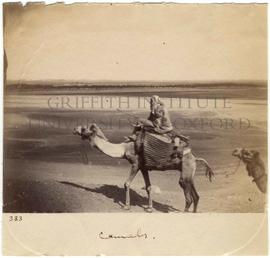 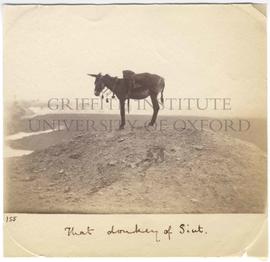 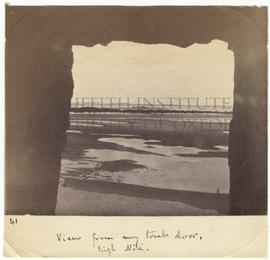 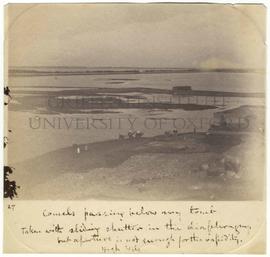 [27] Camels passing below my tomb. 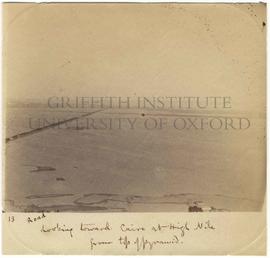 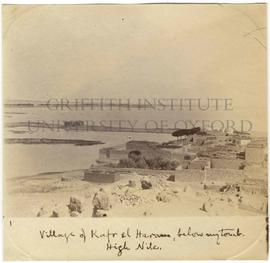 [1] Village of Kafr el Haram, below my tomb.

-Life on excavation: view of the Kafr el-Haram village, below Petrie's tomb at Giza, during the flood.
-Caption:
'Village of Kafr el Haram, below my tomb.
High Nile.'. 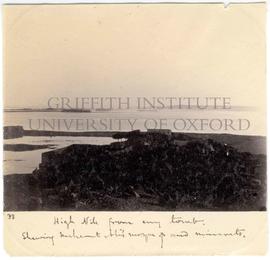 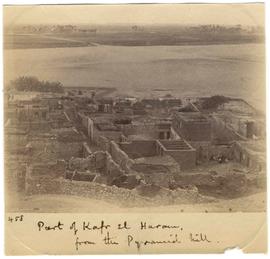 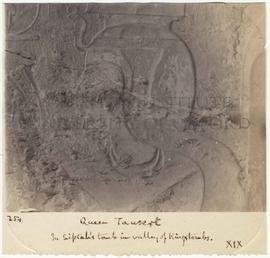 -Thebes.
-Valley of the Kings.
-KV14, Tausert, wife of Seti (Sethos) I, usurped by Setnakht.
-Corridor A.
-Upper part of Queen offering ointment in scene 2.
-TopBib i2.529(3).
-Caption:
'Queen Tausert
In Siptah's tomb in valley of Kings tombs.
XIX' 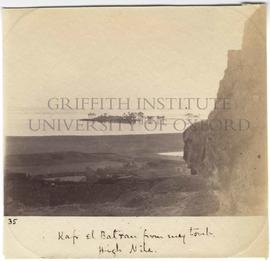 -Life on excavation: view of Kafr el-Batran village from Petrie's tomb at Giza, during the flood.
-Caption:
'Kafr el Batran from my tomb. High Nile.'. 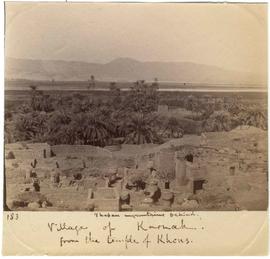 -View of Karnak village, from Khonsu temple, with the Theban hills in the background.
-Caption:
'Village of Karnak.
from the temple of Khons.'.
-Also label for 'Theban mountains behind.'. 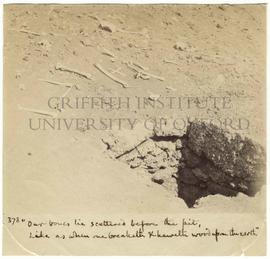 -Scattered bones at an unidentified site, with a quotation from the Book of Common Prayer, psalm 8.
-Caption reads:
'"Our bones lie scattered before the pit,
Like as when one breaketh & heweth wood upon the earth."'. 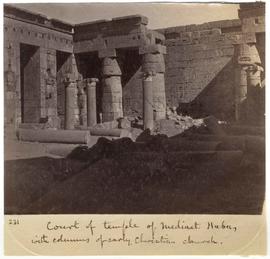 [231] Court of temple of Medinet Habu

-Medinet Habu.
-Great Temple of Ramesses III.
-View of the northern side of the second court with columns of a Coptic church in the foreground.
-Caption:
'Court of temple of Medinet Habu,
with columns of early Christian church.' 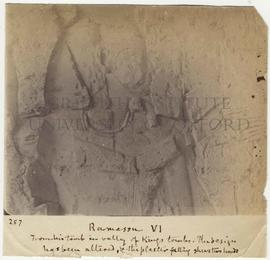 'Ramessu VI
From his tomb in valley of Kings tombs. The design
has been altered, & the plaster falling shews two hands' 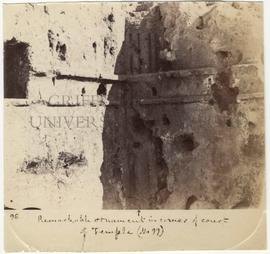 [98] Remarkable ornament in corner of court of Temple (No 99)

-With an arrow pointing to this feature in the photograph:
'↑'. 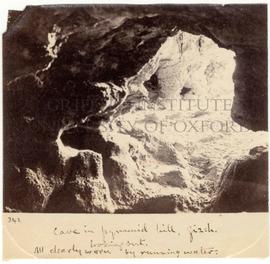 -View of a cave on the Giza plateau.
-TopBib iii2.11.
-Caption:
'Cave in pyramid hill, Gizeh.
looking out.
All clearly worn by running water.'. 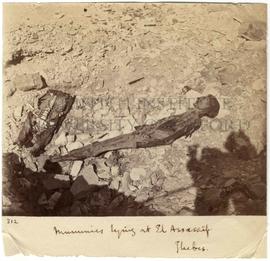 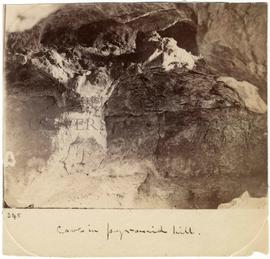 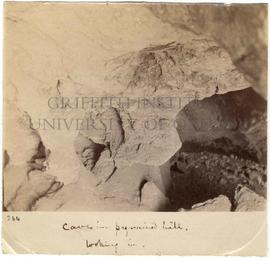 -Photograph of the inside of a cave on the Giza plateau.
-Caption:
'Cave in pyramid hill.
looking in.'. 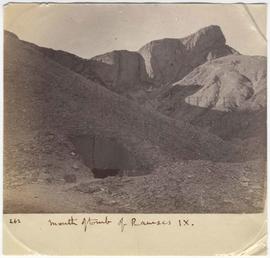 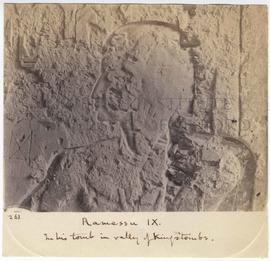 -Thebes.
-Valley of the Kings.
-KV1, Ramses (Ramesses) VII.
-Caption:
'Ramessu IX.
In his tomb in valley of Kings' tombs.' 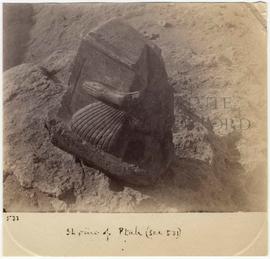 -Saqqara (Ṣaqqâra, Sakkara).
-Lower part of a statue of a kneeling man holding naos containing a figure of Ptah. 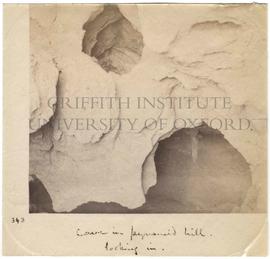 -View of a cave on the Giza plateau.
-Caption:
'Cave in pyramid hill.
looking in.'. 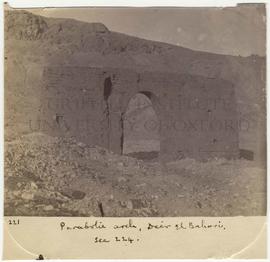 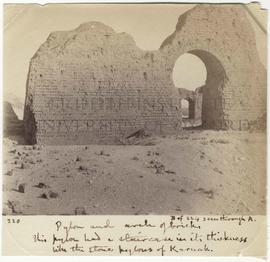 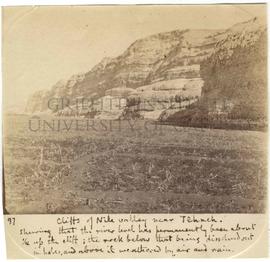 [97] Cliffs of Nile valley near Tehneh.

-Rocky landscape formed by natural phenomena (flood, rainfalls, wind) near Tihna (Middle Egypt).
-Caption:
'Cliffs of Nile valley near Tehneh.
Shewing that the river level has permanently been about
1/4 up the cliff; the rock below that being dissolved out
in holes, and above it weathered by air and rain.'. 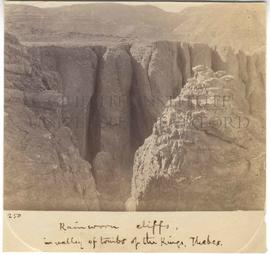 -The rocky landscape formed by rainfalls in the Valley of the Kings (Luxor, West bank).
-TopBib i2.495.
-Caption:
'Rain worn cliffs,
in valley of tombs of the Kings, Thebes.'. 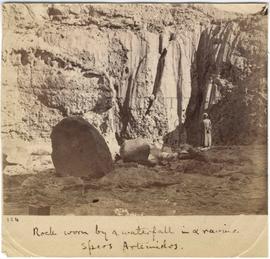 [124] Rock worn by a waterfall in a ravine. Speos Artemidos. 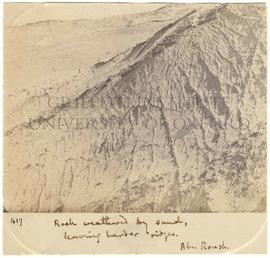