4 letters from Habachi.
1 letter from Habachi to Marie Černý.
Publication exchange, social contacts, Černý's stay in Egypt in 1958, especially his sojourn in Nubia.
The letter to Marie Černý concerns copies of obituaries.

1 letter from Hacker, 1 carbon copy of a letter from Černý to Hacker.
Reference letter for Jürgen von Beckerath, also some personal matters, Černý had just retired.

1 letter from Hamilton to Marie Černý.
Egyptian artefacts - papyri and ostraca - that were given to the Ashmolean Museum, Oxford.

8 letters from Harari, 1 carbon copy of a letter to Harari from I. E. S. Edwards sent on behalf of Černý.
Professional and personal matters; the death of B. Grdseloff and Grdseloff's papers; book purchases; and Harari's work on the ancient Egyptian legal system.

1 letter from Harlé.
Arrangements for obtaining photographs from the Louvre.

1 letter from Hauman.
Reimbursement for Černý from the administration of the Institut des Hautes Études de Belgique.

10 letters from Hayes, 7 carbon copies of letters from Černý to Hayes.
Correspondence mainly concerned with professional matters:
-Deir el-Medina finds in the Metropolitan Museum of Art, New York, notably from the tomb of Sennedjem, TopBib i2.5, photographs of the objects from the tomb
-question of ownership of a scribal palette in the Metropolitan Museum of Art, New York, 47.123, bought from the art dealer, John Tano
-21st Dynasty chronology
-publications exchange
-Černý's plan to finalize his book on the royal workmen
-Hayes satisfied with Eric Young as their new team member, Young had been recommended by Černý
-also personal matters, including a planned visit by Černý to New York

6 letters from Heckel, 3 carbon copies of letters from Černý to Heckel.
Heckel organising her visit to Oxford, arranged with Černý's help.

1 letter from Hickmann.
Resources for the study of ancient music.

1 letter from Homer, 1 carbon copy of a letter from Černý to Homer.
Query about interest rates in ancient Egypt. Homer authored A History of Interest Rates. Homer was recommended by R. A. Parker.

2 letters from Hood, 1 carbon copy of a letter from Černý to Hood.
Sources attesting the rule of King Khayan.

2 letters from Hurst, 1 carbon copy of a letter from Černý to Hurst.
Egyptian king-lists as supporting evidence for dating and analysing Nile flood levels. 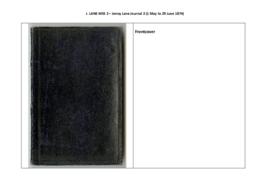