Copies and notes on non-literary texts

Material relating to the Monastery of Epiphanius 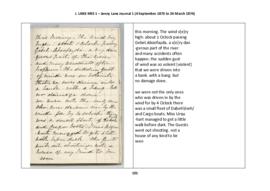 Extracts, summaries and notes from published works, see list inside.

List of numbers of ostraca at New York found in the excavation of the Monastery of Epiphanius and nearby sites - also a few notes.

Copies of Coptic frescoes at Tebtunis, copied by A. S. Hunt, with photographs.